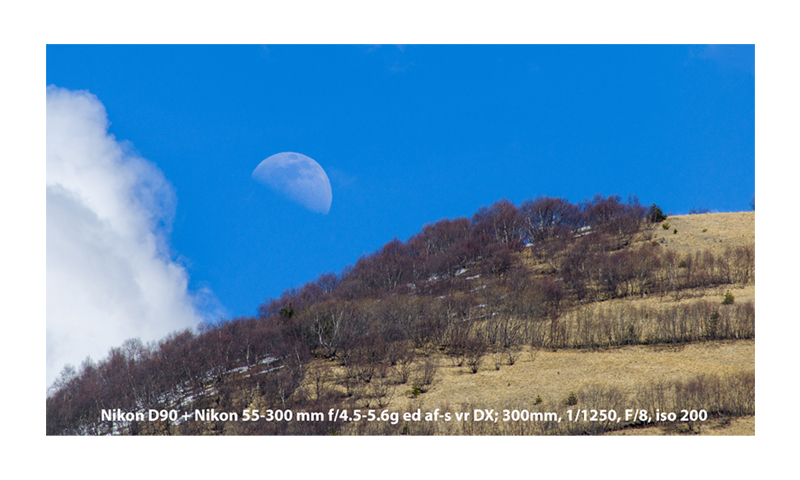 The moon is a beautiful and mysterious satellite of our planet. Seeing her, I want to take beautiful photos. It is not as easy as it seems at first glance. The moon is a tricky subject to photograph. In this article, I will share my experience. Landscapes with a huge moon are most often the result of double exposure. Even as the Moon approaches the Earth, it is too small to fill the entire frame using conventional equipment. Unless you attach your camera to the telescope. The trick is to turn on the camera when photographing  multiple exposure mode (2 in 1). Multiple exposure is a special technique in photography, which consists in the fact that the same frame of photographic material is exposed several times. In this mode, we take two photos (moon + landscape), and the camera combines them into one (photo 1). 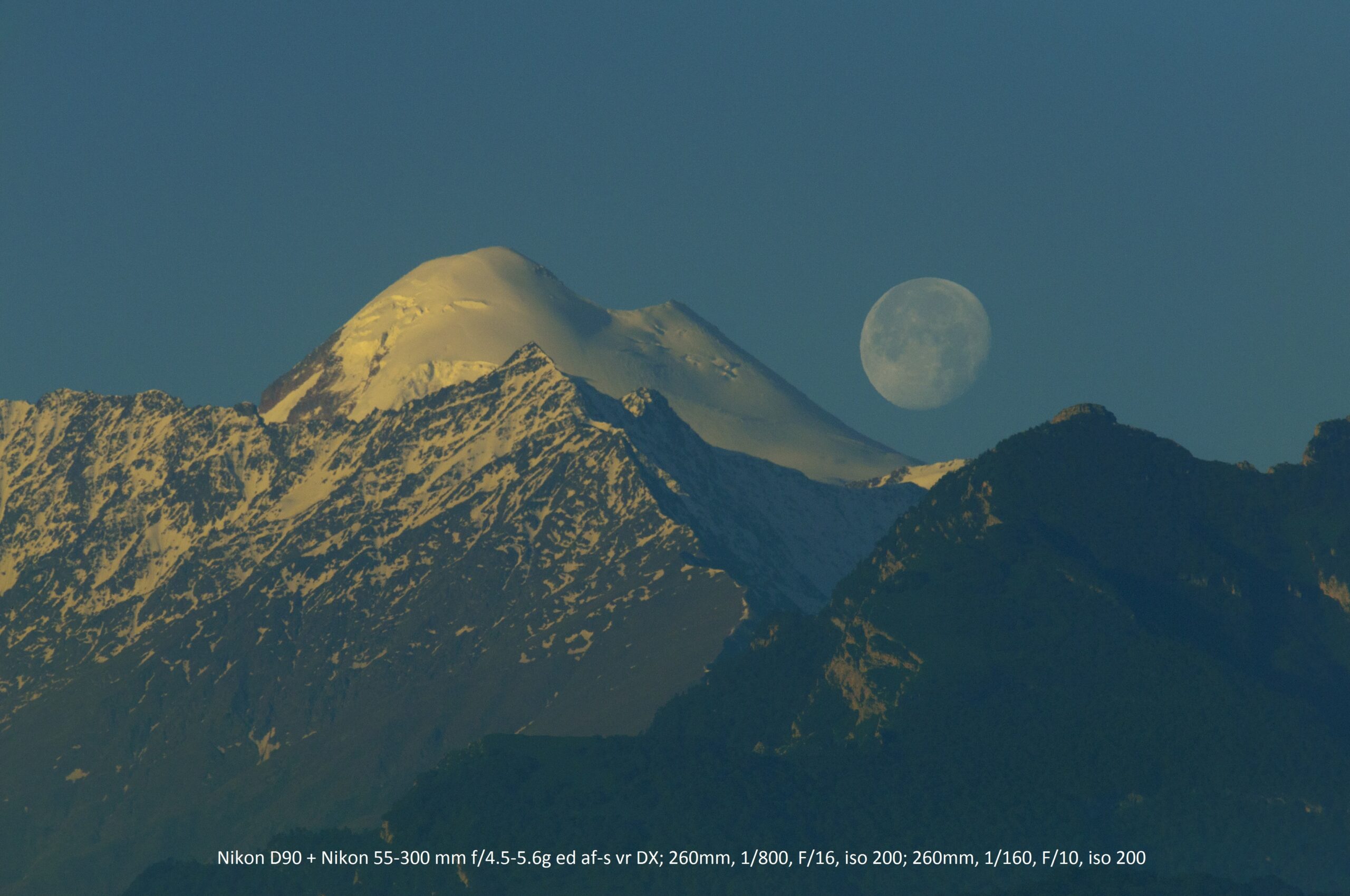 In the first photo, the moon was taken early in the morning at dawn, i.e. almost before entering.

You can also make two frames, and then combine them in a graphics editor. I was able to photograph a landscape with the moon and without multiple exposure (photo 2).

In the second photo we see the so-called «Brokeback Moon».

That’s how lucky you are.

In general, to shoot the moon you need:

• monitor the settings of the camera.

Equipment. To shoot, you need to have a camera with a telephoto lens. Large zoom cameras are also well suited. Such as Nikon Coolpix P1000, Canon PowerShot SX420 IS and the like. I began to take the first pictures of the moon with a Nikon D90 camera and a Nikon 55-300 mm f / 4.5-5.6g ed af-s vr dx lens. Now I use a Nikon D750 camera and a Nikon af Nikkor 70-210f / 4 lens for shooting. I set the DX mode in the camera. Then the equivalent focal length of the lens at the long end becomes 315 mm. And the moon turns out to be the largest. A tripod and a remote control are used to prevent shaking. If there is no remote control, then turn on the shutter delay timer. Although you can take pictures from your hands. Shooting parameters depend on the conditions in which the process itself takes place. 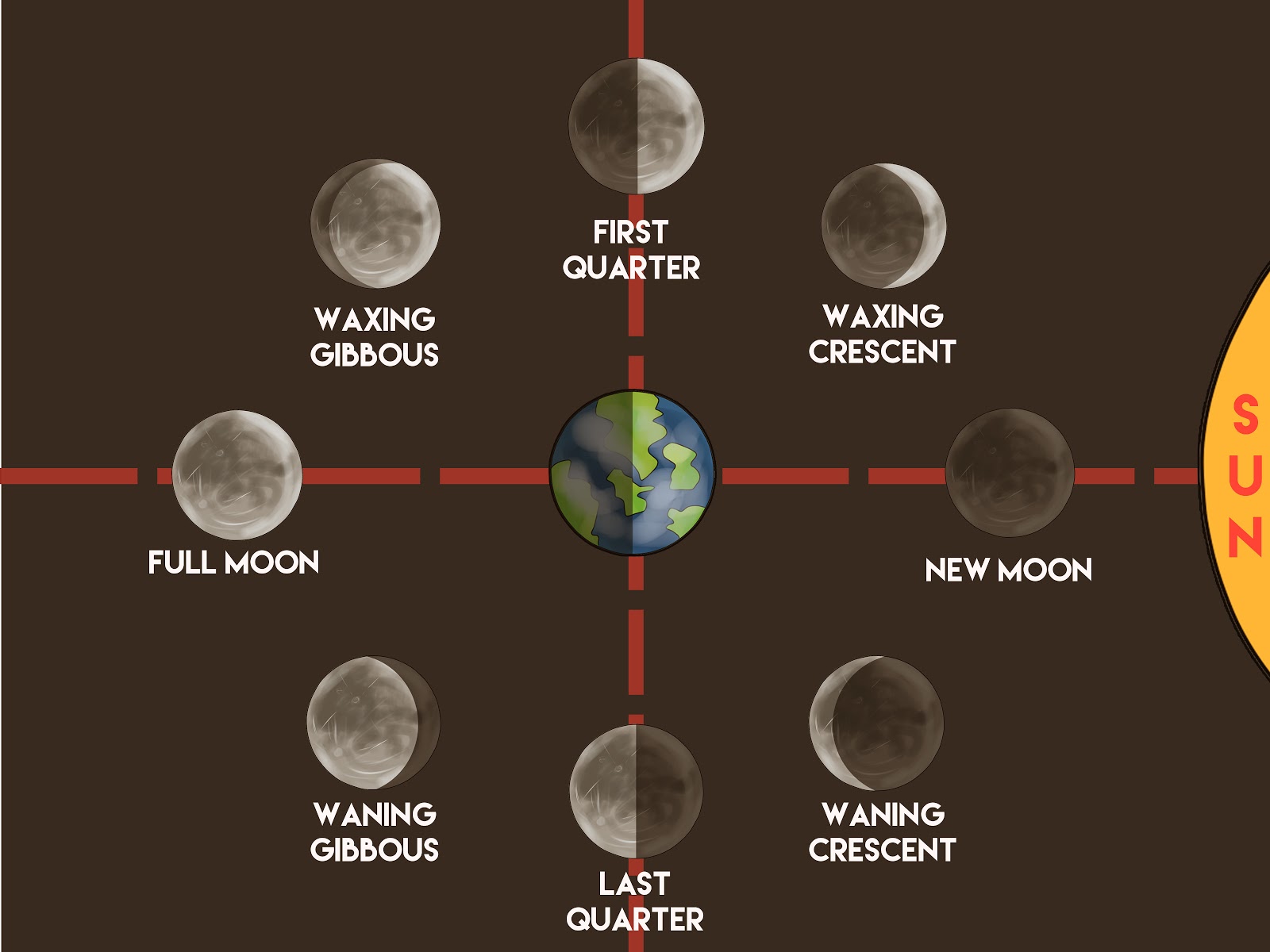 The figure shows the phases of the moon.

Each of the phases has a different appearance and is good for photography in its own way. The full moon is the brightest and yet it looks a little «flat» as the rays of light fall at right angles. The «humpback moon» between the second quarter and the full moon is the most interesting because side lighting creates shadows that reveal craters on the moon’s surface. The waxing moon (or month) is the darkest. It is better to shoot during the «regime time». Regime time is a period that includes one hour before sunrise and an hour after it. And vice versa: an hour before sunset and an hour after it. Because the moon is visible. And the light is soft and diffused. It is enough to photograph the moon with a landscape (photo 3).

In the third photo, we see a landscape with a full moon. The shooting was carried out at the “regime time” and without multiple exposure.

The lighting level changes very quickly, so it is advisable to come to the selected location in advance in order to have enough time to prepare the equipment. And keep shooting to ensure that you are most likely to get a good shot. It is even better to wait for a certain period when the moon is closest to the earth as much as possible. Clear images of the moon are obtained at night. Use a camera with a telephoto or high zoom lens. Then the moon will fill most of the frame. Also, the moon can be seen during the day, but not too clearly, so it is preferable to use it as an auxiliary element rather than as the main subject of the frame. It will also be useful to use various programs to track its phases, sunrise and sunset times.

Camera settings. I shoot in aperture priority mode or manual. The aperture number is usually F / 5.6-F / 8. I try not to shoot at fully open apertures. The slowest shutter speed is 1/320. Sensitivity (no more) — IS0 100. All shooting parameters depend on the brightness of the moon and the illumination of the landscape.

Shooting the moon is a creative, fun process. And with the advent of experience, you will get beautiful and atmospheric photos.