On one of his visits to Moscow, Evgeny Ananievich Khaldei (Soviet photographer, military press photographer) had lunch in the canteen of the Photo Chronicle, where red tablecloths were spread on the tables. Three of them Yevgeny «borrowed» from the dining room, and his friend, a tailor, Israel Kishitser, sewed three banners for him. Khaldei kept them in his duffel bag.

Eugene (on the instructions of the TASS Photo Chronicle) took photographs on May 2, 1945, when the street fighting had already ended and Berlin was completely occupied by Soviet troops. In addition, many red banners were installed on the Reichstag. The photographer asked the first soldiers who met him to help him take photographs. Soon he shot two tapes with them.

The world famous photographs of Yevgeny Khaldei «The Banner of Victory over the Reichstag» captured the fighters of the 8th Guards Army: Alexei Kovalev, Abdulhakim Ismailov and Leonid Gorichev. The banner that Alexei Kovalev is holding in the photograph was brought by the photographer.

One of the photographs was subsequently retouched. Thunderclouds have been added to accentuate the drama of the moment. The banner has been changed to be more red. The second watch of Abdulhakim Ismailov, who supported Alexei Kovalev, who was hoisting the flag, was also retouched. The editorial office considered that this could serve as a basis for accusations of looting, and the photographer removed one watch with a needle before publication.

In 2013, businessman Roman Trotsenko donated a genuine negative photograph he had acquired from his daughter Khaldei to the Moscow Jewish Museum and Tolerance Center (wikipedia). 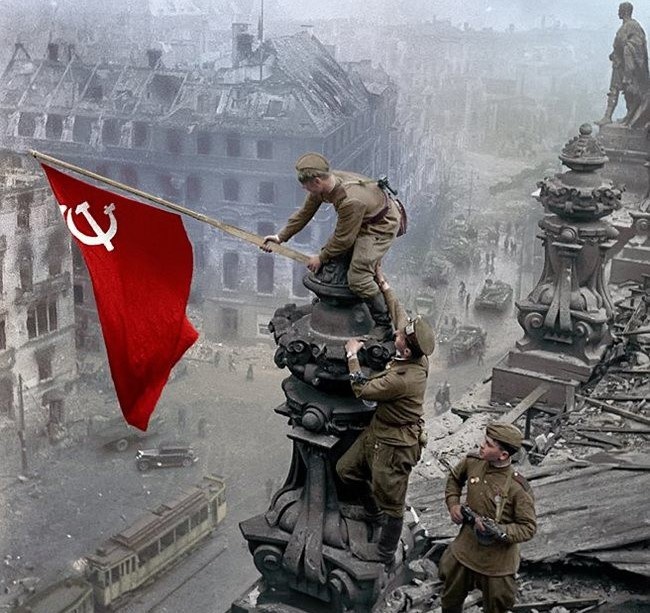