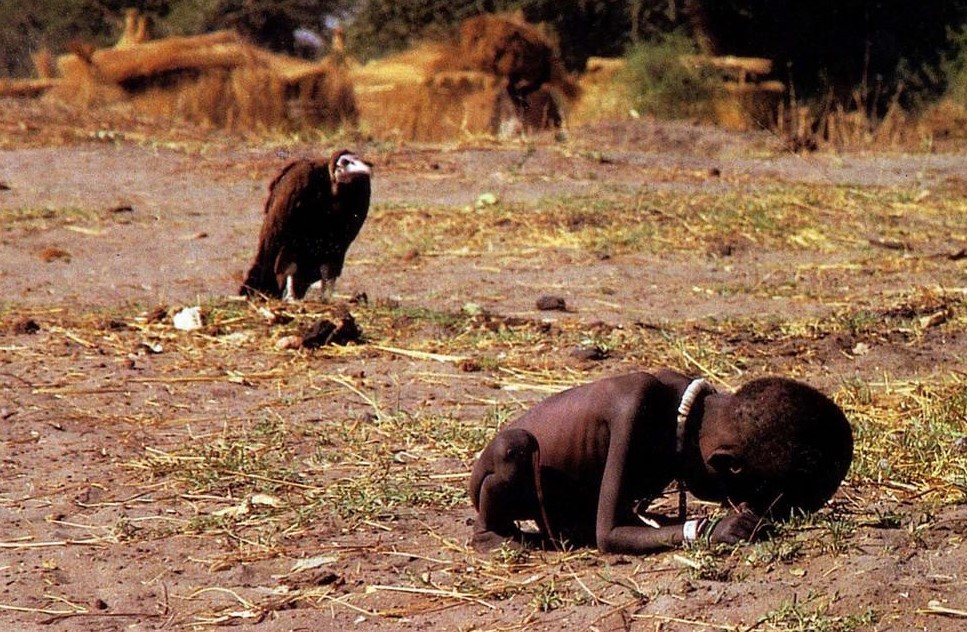 «Photo of a Starving Child, also known as The Vulture and the Girl and Famine in Sudan». In the early spring of (1993) American photographer Kevin Carter flew to Sudan to shoot scenes of famine in a small village. Tired of filming people who died of hunger, he left the village in a field overgrown with small bushes and unexpectedly heard a quiet cry. Looking around, he saw a little girl lying on the ground (now believed to be a boy), apparently dying of hunger. He wanted to take a picture of her, but suddenly a vulture landed a few steps away, apparently awaiting the death of the child. Very carefully, trying not to frighten off the bird, Kevin chose the best position and took the picture. After that, he waited another twenty minutes, hoping that the bird would spread its wings and give him the opportunity to take a shot even more interesting. But the bird did not move and, tired of waiting, he drove it away. Meanwhile, the girl, apparently having gained strength, crawled on. Looking at the girl, Kevin remembered his daughter and began to cry. Later it became known that the child was trying to get to the UN feeding center, located about half a mile in Ayoda, Sudan (now South Sudan). For this photograph in (1994) Kevin received the Pulitzer Prize.