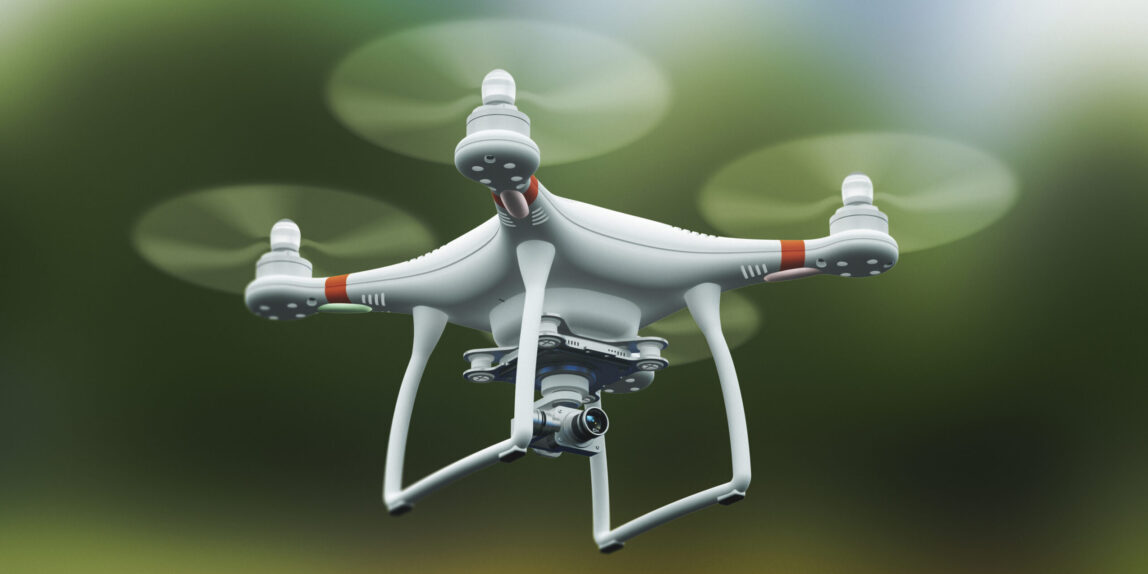 The Drone Awards Photo Contest is a project of the Art Photo Travel Association. Competition dedicated to aerial photography. Pictures taken from unmanned aerial vehicles, parachutes, kites, airships are presented for the competition. Both professionals and amateurs can take part in the competition.

The jury selected the best of tens of thousands of images sent from 102 countries. In November, the work of the laureates will be exhibited at the Siena Awards Festival, which takes place annually in Italy. 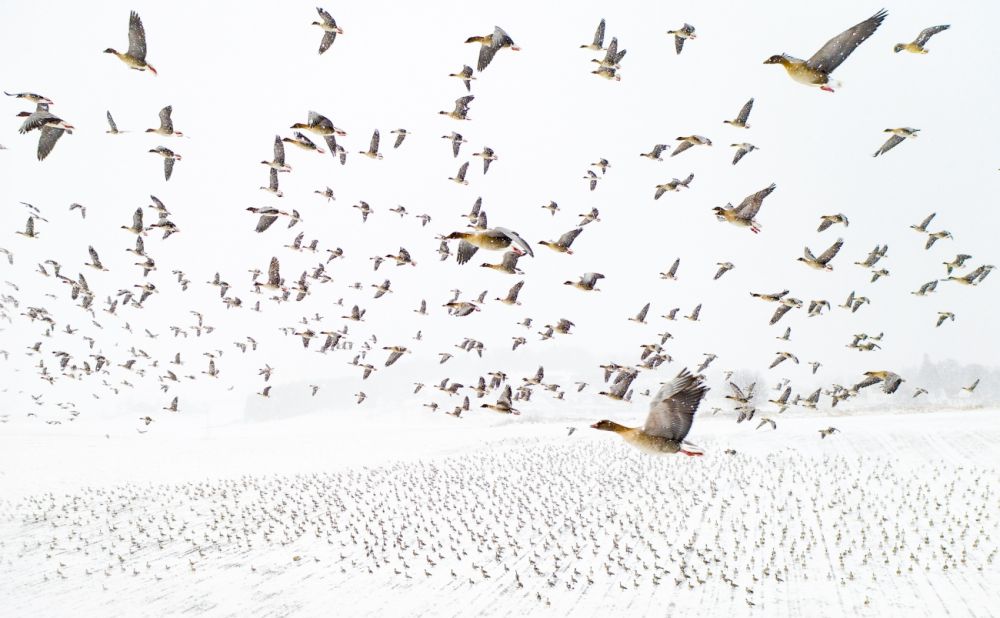 The Grand Prix of the competition and the title of the photographer of the year was won by Terje Kolaas for the photo of short-billed bean goose that flew in winter instead of spring. Photo taken in Norway. 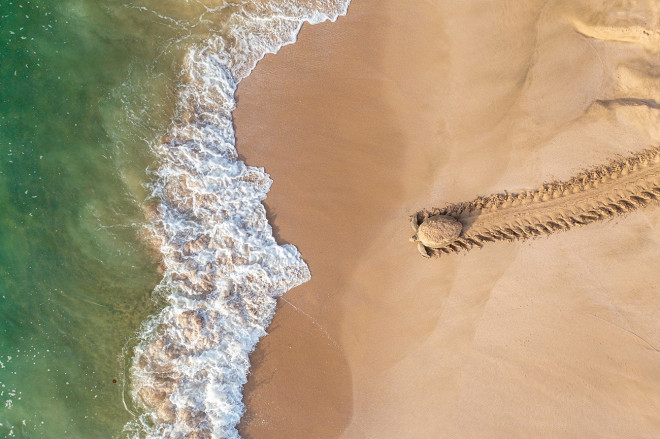 The green turtle returns to the sea after laying its eggs. The picture was taken on the coast of Oman. 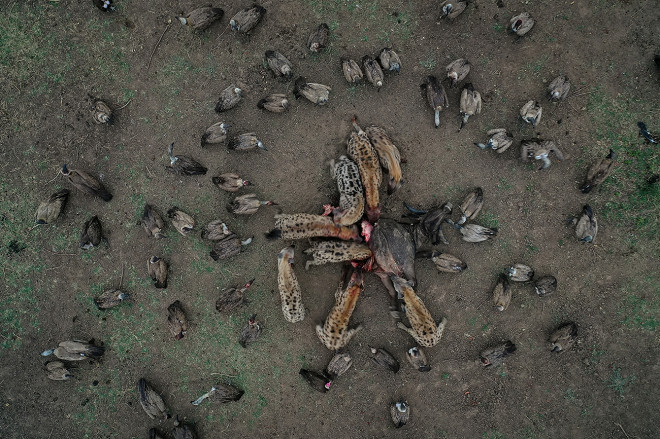 Two lions killed the buffalo and, after eating, left the carcass to other animals. Photo taken in Zambia.

Category «City» Sergey Poletaev. «A metaphorical statement about the city and winter». 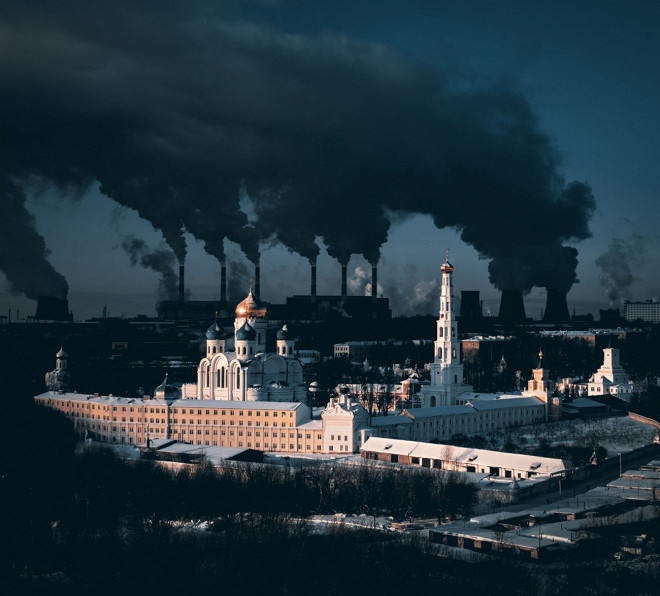 Nikolo-Ugreshsky monastery in the town of Dzerzhinsky near Moscow. In the background there is a large power plant, the smoke from the chimneys of which is especially thick due to severe frosts.

George Steinmetz. «The center of the kingdom». 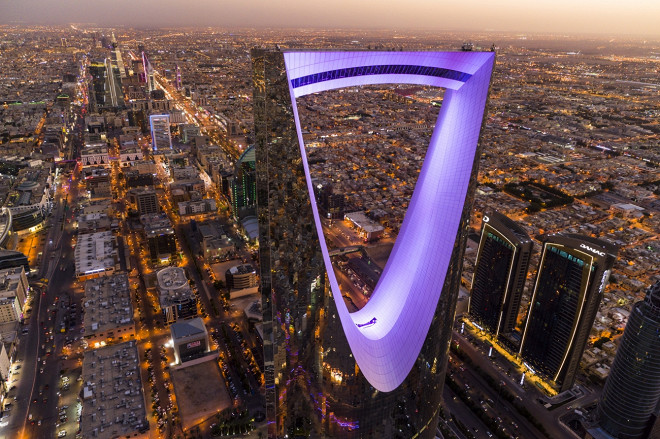 300-meter skyscraper «Kingdom Center» in Saudi Arabia. At the time of construction (in 2002) it was the highest in the country, but has now dropped to fifth place.

Category «Sports» Phil de Glanville. «Gold at the edge of the rainbow». 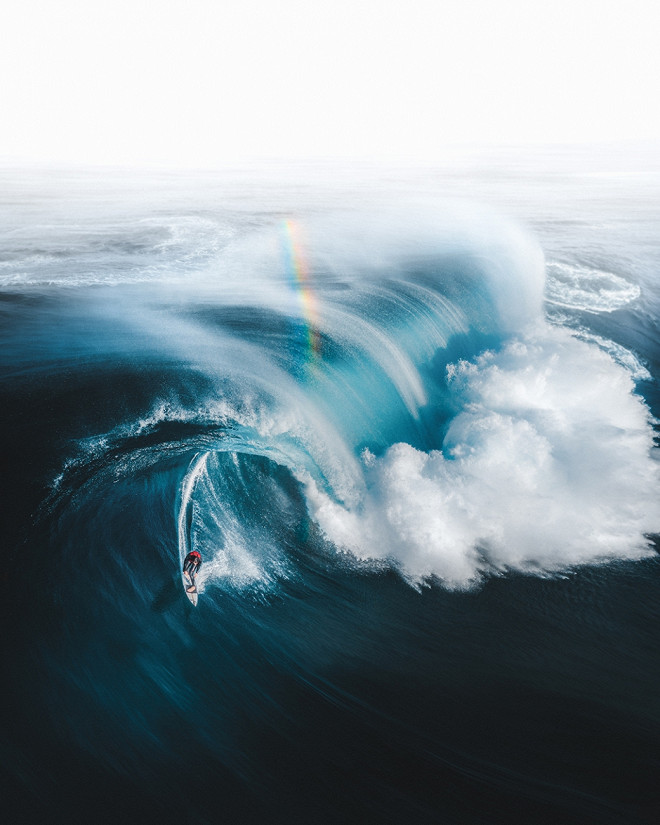 Surfer Ollie Henry walks away from a huge wave off the southwest coast of Australia. 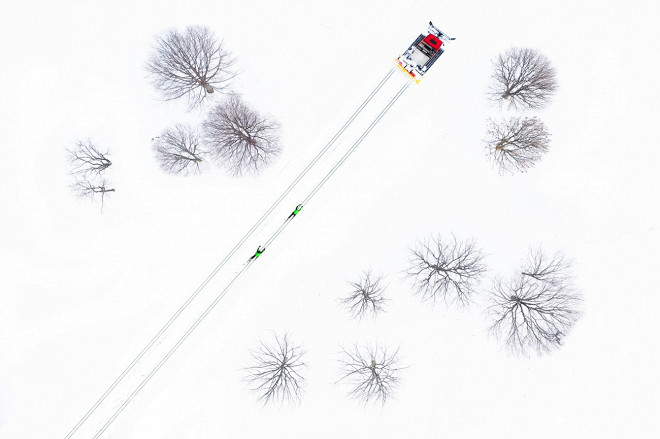 Two athletes ride on a fresh track, which is left by a snowmobile. The picture was taken in the German city of Bernau. 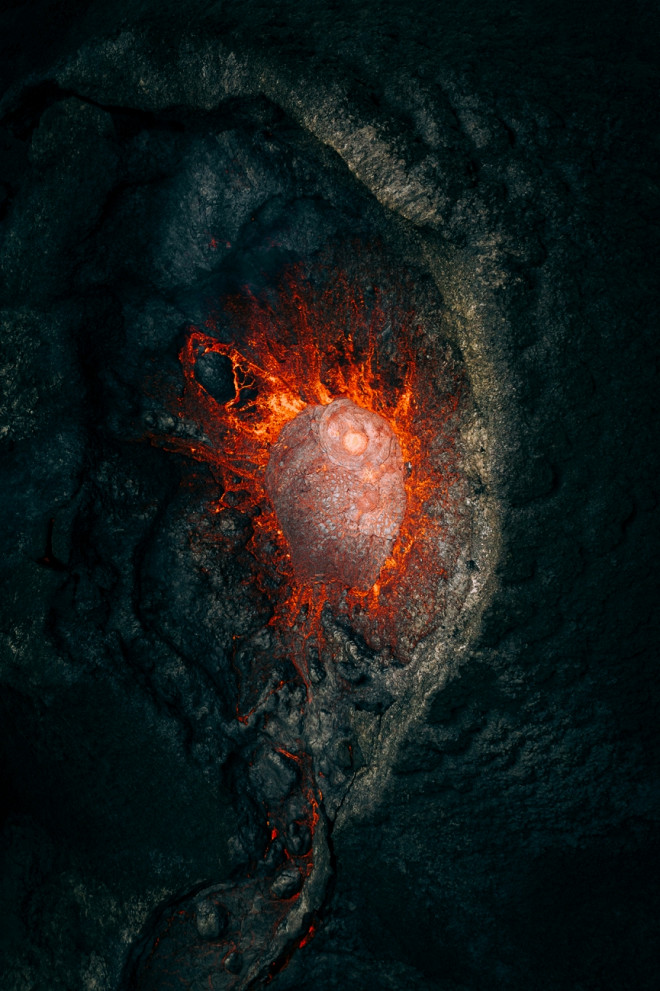 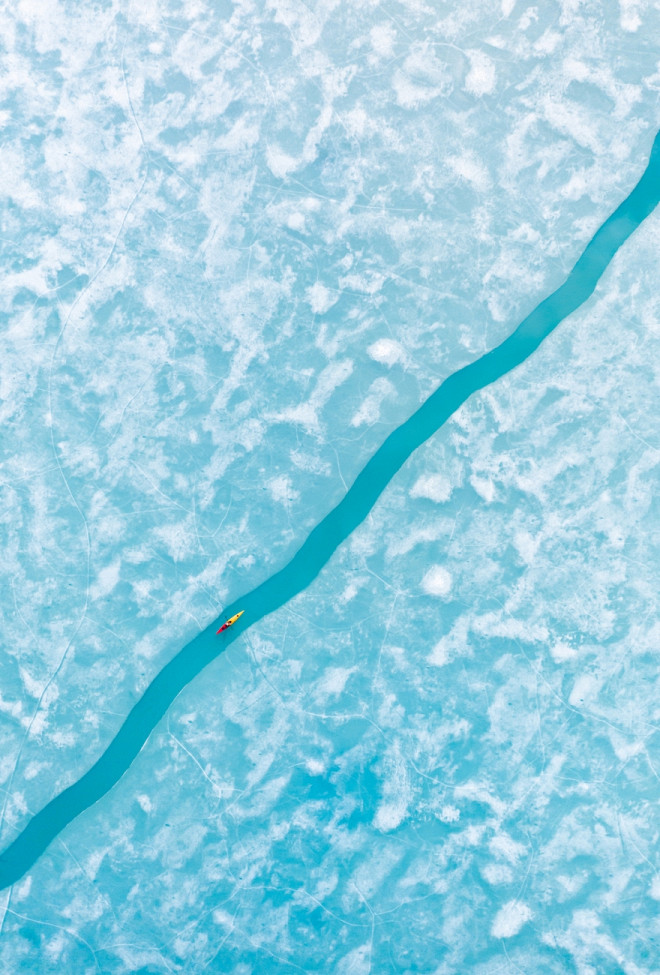 The divergence of ice on the lake. Location unknown.

Category «Wedding» Matteo Originale. «To eternity with you».

The photographer noticed unusual clouds at sunset and decided to direct the newlyweds to them. 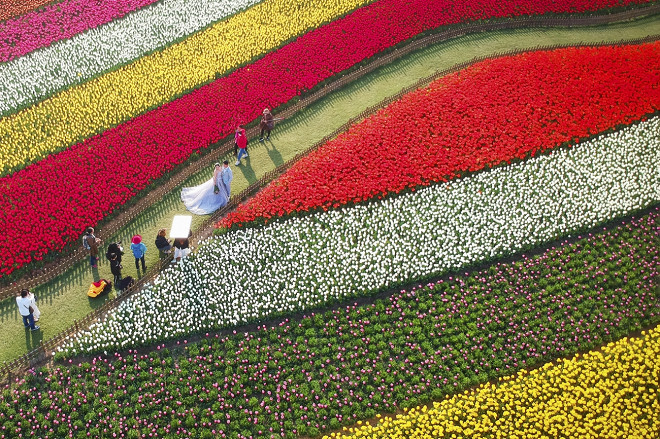 The traditional place for photographs of newlyweds is a well-kept garden during the flowering period. 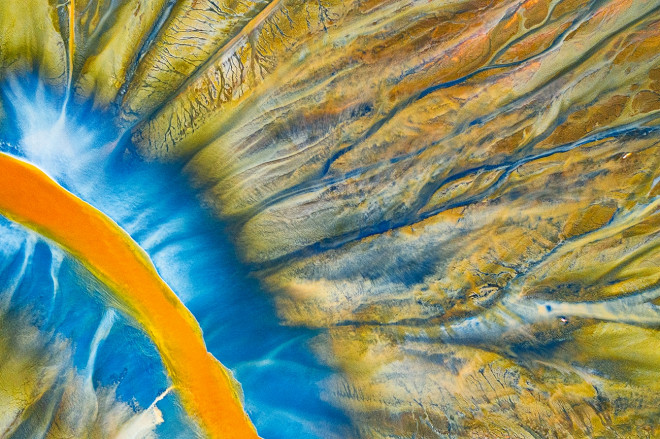 The abstract pattern appeared on the river due to chemical waste that was formed during the mining of copper and gold in the Western Romanian Mountains. 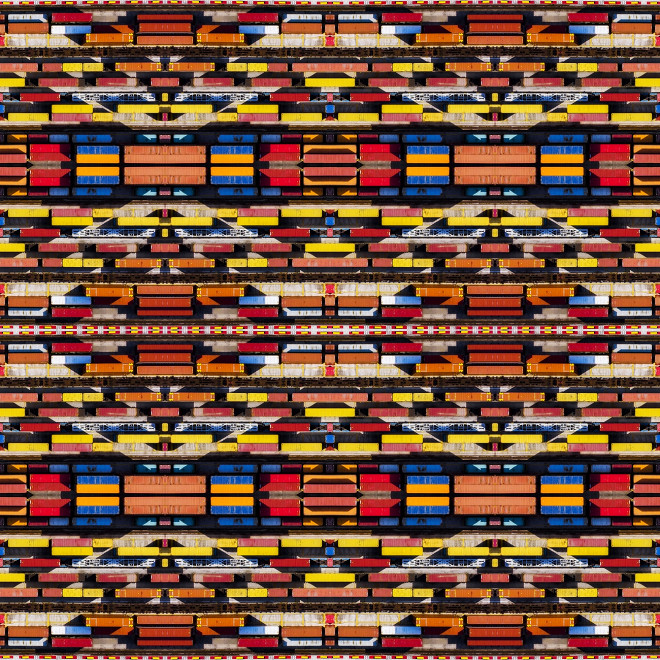 This photo was inspired by the colorful designs of the Navajo people. 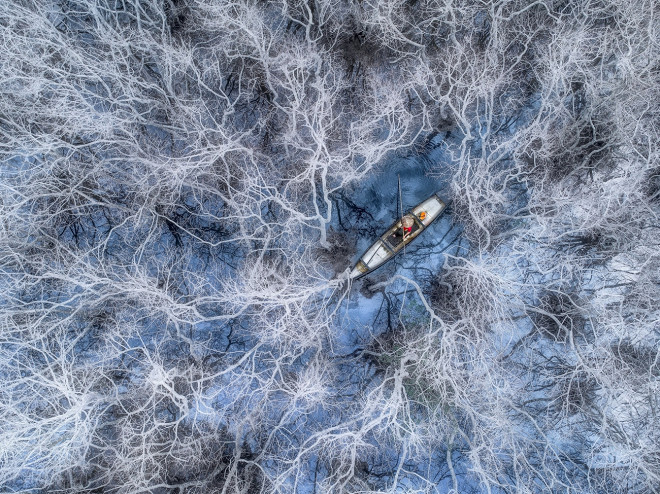 The photo shows a fisherman in a mangrove forest located in the Vietnamese province of Thyathien Hue. The photo was taken in February 2021 at the Kapshagai reservoir near Alma-Ata. According to the author, that day the temperature was -10 degrees, which is warm enough for this time of year and the region, so he decided to open the beach season without waiting for summer.